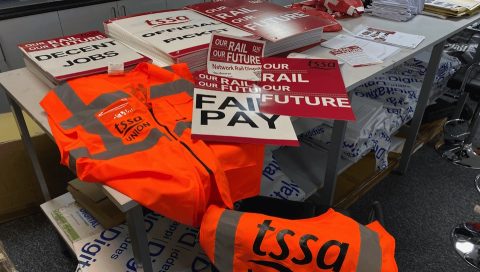 Two UK trades unions have called a fresh round of strikes for later this month. There has been a failure to find any resolution to the wide-ranging disputes over pay and conditions. The Rail, Maritime and Transport (RMT), and the Transport Salaried Staffs Association (TSSA) have called for their members to take separate actions on 15 and 17 September, and 26 and 27 September, respectively.

Rail managers claim that a political straitjacket is forcing them to make pay offers that the unions say are unacceptably below the fast-rising cost of living. With inflation predicted to accelerate, there seems little prospect of an early resolution. For their part, the unions have escalated their actions, with a co-ordinated series of walk outs that will hamstring the network for two consecutive weeks later this month.

Convinced Shapps is to blame

First out will be over 40,000 RMT members from Network Rail throughout Great Britain, and at 14 passenger train operating companies in England. Their picket will effectively shut down the railway network on Tuesday 15 and Thursday 17 September. Previous strikes have had residual effects prior and post to the days of action. It seems likely the same will be experienced in two weeks time. Although only passenger operators in England are targeted, Anglo-Scottish and Anglo-Welsh services will be curtailed. Network Rail however covers the whole of Great Britain, and with their saftey and signalling staff out of the picture, all services, including rail freight, will be struggling to move around the country. Only Northern Ireland, where transport arrangements are administered separately, will remain unaffected.

In separate disputes, RMT affiliated staff at passenger train operator Hull Trains, providing services between Lincolnshire and London, and at the London Overground operator Arriva Rail London will also be taking one day of strike action on 15 September. RMT says that negotiations between the union and rail industry have been ongoing, but there has been no breakthrough nor new offers from either Network Rail or the train operating companies. Speaking bitterly of the part played by the UK government’s transport secretary, the leader of the RMT, Mick Lynch, remained convinced of the reason for the prolonged dispute. “Grant Shapps continues his dereliction of duty by staying in his bunker and shackling the rail industry from making a deal with us”, he said. “The employers and government need to understand our industrial campaign will continue for as long as it takes.”

It is entirely possible that the dispute will outlast the tenure of the transport secretary. Voting soon closes in the leadership contest for the ruling right-wing Conservative party. The winner of the contest (between favourite Liz Truss and former chancellor Richi Sunak) will be announced on Monday 5 September. On the same day they will be presented to Her Majesty The Queen, who is currently at her summer retreat at Balmoral Castle in Aberdeenshire. There, at royal prerogative, the new party leader will be made Prime Minister, replacing the outgoing Boris Johnson.

The candidate will not be returning to parliament in London by train. The Queen’s great great grandmother (Victoria) would not allow the line to run further than neighbouring Braemar, and a government rationalisation closed the line entirely. The appointment of the new Prime Minister will signal a cabinet rationalisation too. Whether trains to rural Aberdeenshire, or anywhere else for that matter, will still be the concern of Grant Shapps beyond this Monday will be at the prerogative of the new PM.

The new prime minister, and his or her new or retained transport secretary, will only have eight days to avert the planned strike by TSSA members. Staff at nine passenger train operating companies, as well as at Network Rail, will walkout from midday on Monday 26 until midday Tuesday 27 September. The timing of the action will disrupt operations possibly until well into Wednesday. TSSA general secretary Manuel Cortes has called for the UK government to allow train operating companies to return to the negotiating table with a revised deal which improves on the what the union claims was a rejected two per cent offer earlier in the summer.

The strike action will coincide with the opposition socialist Labour Party annual conference, being held in Liverpool. As a Labour affiliated union, TSSA will be looking for support from the conference delegates and the parliamentary party. They want them to join members on the picket line, called to show solidarity in fighting the cost of living crisis, which the union believes is the responsibility of the Conservative party. Ironically though, the first significant political casualty of the dispute was Labour’s own shadow transport secretary, Sam Tarry, who, despite party instructions, joined RMT pickets at London’s Euston station earlier in the dispute.