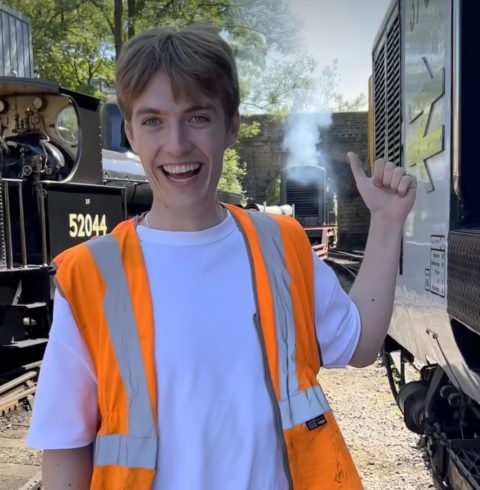 While train spotting is a popular activity, it is by no means something mainstream. That has changed over the past 1,5 years with the meteoric rise in popularity of Francis Bourgeois. Through Instagram and TikTok, he reaches an audience into the tens of millions, making him the towering figure among railway influencer.

To be fair, the railway industry has its fair share of prominent online figures. People who enjoy travelling via railway will undoubtedly know The Man in Seat 61, arguably the sector’s most famous guide to train travel. He has around 167,000 subscribers on YouTube.

Bourgeois, whose real name is Luke Nicolson, has a following of 1,7 million on Instagram. On TikTok, he has an audience of 2,6 million fans and has racked up more than 51 million ‘likes’ since he first started during the 2020 corona lockdown in the United Kingdom.

Such has his rise to fame been, that he has already attracted the attention of Gucci, Puma and Spotify, to name but a few major brands. He was a special guest at the 2022 Miami Formula 1 Grand Prix and has rubbed shoulders with the rich and famous at various other events. To top if off, Bourgeois in July announced his first book: The Trainspotter’s Notebook, which will be available at the end of October.

“The anticipation of a train coming by or finding the next spot to watch a loco coming along the tracks is a time of complete focus for me, disconnecting from the rush and busyness of life. Those moments are the best fun I’ve ever had. In those moments, I feel completely at one with myself, and I want to share that feeling”, Bourgeois says about his forthcoming book on Amazon.

When watching his video’s, Bourgeois’ child-like enthusiasm is as disarming as it is contagious. He seems completely unapologetic about his passion. For example, he had no qualms about sharing the tears in his eyes when two of his favourite power cars, the 43061 and 43075 from the British Rail Class 43 (HST), rolled past for one last time on their way to be scrapped. In fact, his post collected 1,6 million ‘likes’.

And while he has caught the eye of big fashion brands, Bourgeois is no polished social media starlet by any stretch of the imagination. Yet it is probably exactly that which has caught the eye of millions around the world. That and the inexplicable choice of a fisheye lens for his GoPro camera facing him. This quirky camera angle makes his videos instantly recognisable and fun to watch. So if you’re ever having an uneventful day or feeling down, head over to one of Bourgeois’ social media channels. You’ll be lifted up in no time.

Good for Luke – but for Railways – and Main Stream?
(Why is railway permanently plaguing us, we, mainstream…, we all, majority, in fact born fans of railways?)
Sooner the better, our love should be returned!