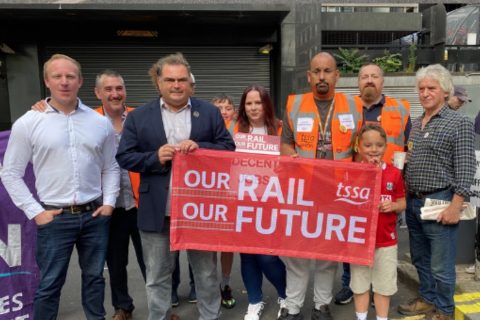 The state of industrial dispute that currently grips the British rail network has claimed a high-profile political casualty. Surprisingly – shockingly for some – the socialist opposition Labour Party sacked their shadow transport secretary Sam Tarry. The party said the politician had been sacked from his high-profile shadow cabinet role for making unauthorised media statements while standing on a picket line at London’s Euston station – pictured by TSSA in shirt sleeves along with jacketed TSSA general secretary Manual Cortes.

Yesterday’s all-out strike by 40,000 members of the RMT trades union brought the network to a halt, and also resulted in the sacking of Tarry. The move, directly endorsed by the Labour Party leader Kier Starmer, has been met with incredulity by the ruling Conservative Party. Sources within their leadership rate this as a spectacular political own-goal. Union leaders – including those of the rail union TSSA, of which Tarry was a long-standing member – have been shocked. In what is widely regarded as a betrayal of the working class supporters of the party, one union leader claimed the party had become irrelevant to the needs of ordinary British people.

Sentiment shifting among politicians and public

The news of Tarry’s dismissal overshadowed the critical take-aways from Wednesday’s stoppage. Support from the members of the RMT union remained solid, with independent observations reporting that eighty per cent of services on the British mainland failed to operate, with passenger timetables most severely affected. Freight operations were not spared disruption, but the lack of direct involvement in the RMT-led dispute mitigated the effects – insofar as freight traffic could run, given the involvement of Network Rail signalling staff.

Most tellingly, a weakening public sympathy with the dispute was noted in several media reports. Tolerance of the strike has visibly wained, and that has been grasped with both hands by the UK government’s Grant Shapps. Far from being dislodged from his position, the transport secretary took to the offensive during yesterday’s action, to highlight what he claimed was the intransigence of the union leaders to put to their members any revised offers from Network Rail and the passenger operators. He claimed instead that talks were being stalled at national executive level and that the dispute was just the latest in a never ending power struggle for control of the railway in the UK.

Isolation and entrenchment for further action

The trades unions, for their part, have understandably refuted Shapps claims. The line from the RMT is that the offers on the table are still not nearly sufficient to meet the demands of the membership. As it stands, they see their position as increasingly isolated politically and increasingly entrenched. The open hostility towards the ruling Conservative Party is currently allied with dismay at the opposition Labour Party, the latter historically allied to the working class. However, the refusal of labour to endorse the strikes, and the banning of party officials from stating their support, has confounded their rank and file members.

The repercussions for Labour could be felt, not only at the ballot box, but also in the party’s coffers. Many trades unions (including TSSA) are affiliates and donors to the party. Notably, RMT is not. However, the train drivers union, ASLEF, recently voted to remain affiliated to the Labour Party, and that union has called its members out on strike this Saturday (30 July). There are further strikes called for August, by both RMT and ASLEF. TSSA has successfully balloted its members at several train operators, and will join strikes on 18 and 20 August.

Frustrations, Exit, etc. are symtoms.
For sustainably meeting with competition, from far away manufactured and forwarded, by cheapest, worst polluting ocean transports,
a decisive upgrading of railways since long, is requested!
(All other devices, by air and by sea, the road trucks, etc., upgrade – for high utilisation of assets, of staff, etc.)
A New Old Railway, a timely, robust and sustainable, now has to be constructed for!
(Regardless of Brexit, nearness, to and within Market is Goal!)