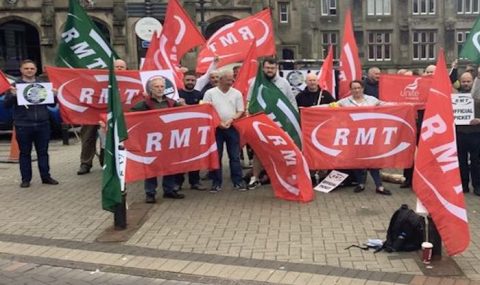 Talks between unions and rail bosses in Britain have broken down without agreement. The RMT (Rail, Maritime and Transport Union) has called for a fresh strike on Wednesday, 27 July. The formal notice was given on 13 July, meeting the legal requirement for two weeks’ notice.

Media sources have made headlines with the fact that the strike comes just one day ahead of the opening of the Commonwealth Games in Birmingham, where the main venue is served by its own station and relies heavily on public transport. Later in the day RMT also announced two strike days for 18 and 20 August. Another union, ASLEF announced their train-driving members would also walk out on 30 July.

Network Rail negotiators, who were leading talks on behalf of themselves and most of the passenger train operating companies in Britain, had their latest pay offer disqualified by a union delegation. NR admitted they had offered a deal that included a four per cent immediate pay rise, with a further four per cent tabled for next year, with a host of conditions attached. The dispute with the RMT is not the only unrest in the railway industry. Sister unions ASLEF (which represses train drivers) and the TSSA (Transport and Salaried Staff Association) both have ongoing disputes, which would affect services across Great Britain. Only Northern Ireland, among the four nations of the United Kingdom, has avoided involvement in the current round of industrial unrest.

It is perhaps a sign of the public mood that the news of the forthcoming rail strike has been pushed off the home page of BBC News by discovering a hidden Van Gogh at a gallery in Edinburgh. That and other world and national news have gripped the national attention more firmly than the RMT rejection of what they called a paltry Network Rail offer and the declaration of a further twenty-four-hour strike. Railway workers will again take strike action over job security, pay and working conditions on Wednesday, 27 July, Thursday 18 August and Saturday 20 August.

Some have speculated that Grant Shapps, the transport secretary, withdrew from the selection process for a new leader of the ruling Conservative Party because of the pressures on his Department for Transport. Shapps entered the selection process after last week’s prime minister Boris Johnston resigned. Instead of joining in the round of leadership campaigning yesterday, he took time to address the media, telling national sources that he believed the RMT was committed to causing further misery. “No deal was ever going to be good enough for the RMT”, he told BBC News.

The 24-hour stoppage comes after Network Rail made an offer of four per cent in the first year of the settlement, followed by four per cent in the second year. “[This was] conditional on RMT members accepting all attacks on their terms and conditions”, said an uncompromising union statement. “RMT has yet to receive a pay offer or guarantees over job losses from the train operating companies.”

Although rail freight operators are not involved directly in this dispute, freight services were severely disrupted in the first series of one-day strikes last month. However, that neutrality may be jeopardised by strike calls at both the ASLEF and TSSA trades unions. “We will also be consulting other unions that have delivered mandates for strike action in the coming days”, says the RMT. That has prompted speculation that a coordinated rolling programme of strikes could halt the rail network almost indefinitely.

Members of the RMT at the infrastructure agency Network Rail (in England, Scotland and Wales) are under starters’ orders for strike action from 02:00 on Wednesday, 27 July. Members among most of the passenger train operating companies in England will take action from 00:01 until 23:59 on the 27 July. The pattern will be similar in August. Northern Ireland, where the transport system and union affiliation are both organised separately, will remain unaffected.

The Commonwealth Games (formerly the British Empire Games) are the biggest athletics event in the world after the Olympics and are being hosted this time in Birmingham. The ceremonial opening and competition begin on 28 July amid national fanfare. The National Exhibition Centre, five miles (8 kilometres) south of the city centre, is served by Birmingham International station – which also serves the airport and will be connected to the new HS2 line via an interchange. Organisers are nervous that disruption following the one-day strike will be a fall at the first hurdle for their carefully laid plans.

Regrettably, both parties now are used of, even worse, in fact spoiled, by voters, currently being very much pro rail…
Sooner the better “Railways”, by voters, us, we, tax payers, are imposed responsibility, visavi client, ware owners, etc.!
(All, others, global, by air and by sea, as well road trucks upgrade, for lower costs, for reduced track charges, etc., etc.)
A “New Old Railway” , a shift, since long has been needed. Costs for permanented subsidies is devastating – for all!