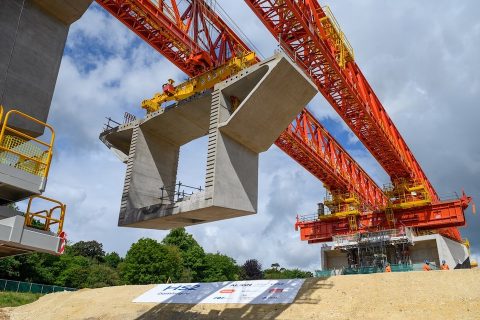 Colne Valley: HS2 takes it to the bridge

The company building Britain’s high speed railway has begun work on the biggest surface project along the route of HS2. The Colne Valley Viaduct, a structure that will become the UK’s longest railway bridge, is finally under construction. The milestone was marked by the installation of a giant bridge-building machine on the outskirts of London.

HS2 Limited has started construction on a very modern interpretation of the traditional railway viaduct. Their enormous 700 tonne bridge-building machine has begun work at a site just outside London. Stretching for more than two miles (3.4km) across a series of lakes and waterways between the outer London suburb of Hillingdon and the M25 orbital motorway, the Colne Valley Viaduct will also be the longest railway bridge in the UK.

A feat of British engineering

The start of construction is a major milestone in the delivery of the HS2 project, which is designed to improve rail links between London, Birmingham and North. The UK government hopes it will help with their economic levelling-up policy, and will provide a low carbon alternative to car and air travel.

Technically known as a ‘launch girder’, the 160m long bridge-building machine is the only one of its kind in the UK. It will be used to lift giant concrete deck segments into position. Once each section is complete, the machine will inch itself forward into position to build the next stage. A total of one thousand deck segments will be needed, with each one weighing up to 140 tonnes.

To allow for the gentle curves of the viaduct as it crosses the valley, all the segments are slightly different shapes and made on site at a purpose-built temporary factory.

Originally built in 2004, the launching girder was first used during the construction of the Hong Kong East Tsing Yi Viaduct. Specially designed to handle complex viaduct construction, the machine is named ‘Dominique’ in memory of Bouygues engineer Dominique Droniou who played a leading role in its design and development.

56 piers each weighing around 370 tonnes are being constructed along the Colne Valley ahead of the girder, with the girder moving from one pier to the next, installing the deck segments as it goes. Once construction is complete, the factory and surrounding buildings will be removed and the whole area between the viaduct and the Chiltern tunnel will be transformed into an area of chalk grassland and woodland as part of HS2’s ‘green corridor’ project.

Perhaps in anticipation of some objections, HS2 recently raised a wide-ranging legal action to prevent incursions on to its construction sites, including the Colne Valley.