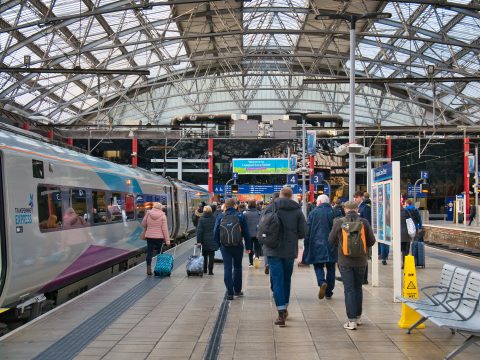 In May, UK railway passenger numbers reached a high of 92 percent of pre-Covid levels, new statistics of the Department for Transport (DfT) reveal. The Railway Industry Association (RIA) hailed the new figures on Tuesday.

Towards the end of May, passenger number in the UK were hovering between 86 and 92 percent of pre-Covid levels. “These figures show that people are returning to rail in ever greater numbers”, RIA said. “This is not just leisure travel coming back – commuter travel, including Mondays and Fridays, has been steadily increasing too’, the association added.

With these percentages, UK is performing better than the European average, as evidenced by recent figures published by the Community of European Railway and Infrastructure Companies (CER). According to the latest CER Crisis Impact Tracker update, passenger numbers in Europe were at around 75 percent of pre-Covid levels in March.

The RIA is particularly pleased that the increase in UK passenger numbers happened over a relatively short period of time: less than three months since the gradual easing of pandemic restrictions.

That said, the RIA urges the government not base its plans for the formation of the Great British Railway (GBR) company and its rail strategy for the coming three decades on the past two years. The GBR will be tasked with overseeing rail transport in the UK from 2023 onwards.

How to get (international) rail passengers back into the train? That is one of the topics covered on the third day of the RailTech Europe conference on 23 June. Digital and physical tickets are available on the event website.