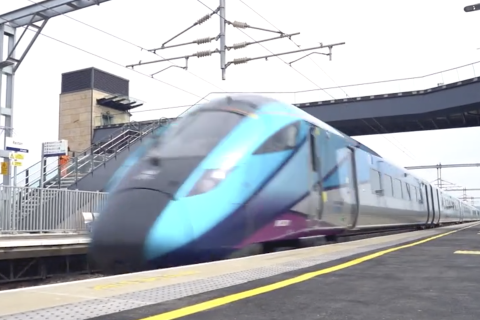 Network Rail has completed the construction of Reston station on the East Coast Main Line (ECML), between Edinburgh and Newcastle. Today’s (23 May) very first scheduled call is the 06.16 TransPennine Express service from Edinburgh Waverley to Newcastle. Passengers – including the Scottish transport minister – will have to wait until 07.26 for the first northbound service – a London North Eastern Railway (LNER) train to Edinburgh.

It may not be the highest profile opening in the UK this week, but for the community of Reston in the Scottish Borders, their new station is the biggest thing to happen since the gates closed on the last train, almost exactly 58 years ago.

The station has been backed by a 20-million-pound (23,6 million euro) investment from the Scottish Government. Completion will enable trains to serve the village and the rural hinterland for the first time since 1964.

A collaboration between government, construction contractors, infrastructure agency and train operators, has seen the Scottish Borders region gain its first stop on the ECML since the rationalisation programme of the 1960s closed all intermediate stops at the same time as sweeping away the entire network in the region. The only piece of this new puzzle that’s missing is ScotRail, making Reston the second anomalous station in Scotland unserved the publicly-owned operator.

Reston station boasts a pair of 270 metre long platforms which cater for 10 carriage trains and is fully accessible with step free access. The station footbridge is the first structure of its type to be installed on the UK rail network. Spanning 16 metres across the railway, the ‘Ribbon’ footbridge design improves both the passenger experience and the aesthetic quality of station structures, according to a statement from the contractors BAM Nuttall.

The station has been the focus of a long campaign, led by the activists of Rail Action Group East of Scotland. RAGES continue to work towards further improvements – including the provision of a further intermediate station at East Linton, and restoration of a branch line at Haddington. Both these communities are economic growth points and generate much additional raod traffic into Edinburgh.

At Reston, which is effectively a transport interchange for the region, work at the station got underway just over a year ago. “Reston station is an investment in transport but also in our economy, communities and our environment”, says a statement from the contractors. “It will deliver significant benefits by enhancing the public transport network, improving active travel networks and developing economic, leisure and tourism potential.”

“In the last ten years, BAM Nuttall has been involved in the building or reopening of 27 stations across the UK” said Huw Jones, BAM Nuttall Managing Director for transport projects. “It always brings me the most satisfaction to deliver brand new stations like this, seeing a community connected to the rail network for the first time in half a century.“I would like to thank the BAM and Network Rail teams along with our supply partners who have worked so hard to deliver this project in a very concentrated period of time.”

While supported and financed by the Scottish Government, the station will not be served – at least for now – by ScotRail trains. The national operator does not schedule ECML trains beyond Dunbar so Reston will be in a similar situation to Lockerbie on the West Coast, and will rely on a pair of cross-border operators for its services – Transpennine Express, and LNER. It’s for that reason that the platforms have been built to accommodate long-distance trains. Curiously, it may be easier to reach far-off cities like Manchester and York, than nearer-to-home destinations like Bathgate and Slateford.

Nevertheless, the opening has been heralded as a leap forward by partners in Scotland. “It is part of our commitment, alongside the Scottish Government, to expand the rail network and connect Scotland’s Railway to new communities”, said Alex Hynes, managing director of Scotland’s Railway, the operator branded as ScotRail.“The opening of the station at Reston is an exciting development that has the potential to transform life for local people and the communities it will serve.This station will create new social and economic opportunities and we look forward to welcoming services back to Reston – and to seeing the positive impact the railway will have in years to come.”