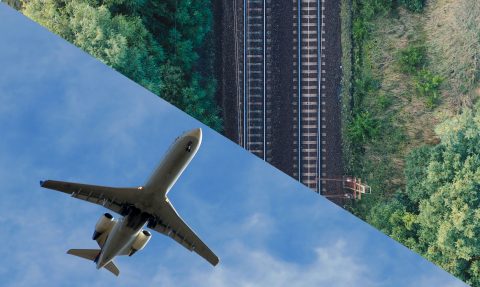 Are the benefits of shifting short flights to rail overestimated?

According to a report commissioned by five airline associations, the CO2 benefits of shifting short haul flights to rail are limited. The report aims to highlight the fact that the picture is far more complex than “simply shifting from one transport mode to another”.

The decarbonisation of the transport sector, which accounted for nearly thirty percent of the EU’s overall greenhouse gas emissions in 2018, will play an important role in reaching Europe’s goal to be climate neutral by 2050. The ‘shift to rail’ is often named one of the solutions, for both passenger and goods transportation.

However, aviation associations Canso, ERA, ACI, ASD Europe and Airlines 4 Europe call for “greater balance and factual accuracy” in the debate around sustainable transport. The report ‘Short-haul flying and sustainable connectivity’, which they commissioned and was carried out by consultancy firm Oxera, lists the factors that should be considered when looking at the environmental impacts of European air and rail passenger transport. But first of all, how much is the actual difference in emissions between the transport modes?

When it comes to transport, the differences are large when it comes to the respective emissions of greenhouse gases. On average, air travel within Europe emits five to six times more CO2 per passenger-kilometre than travel by train, according to a study commissioned by the European Federation for Transport and Environment.

The emission costs related to the manufacturing of trains, planes and cars, their maintenance and scrapping, and the construction and maintenance of the transport infrastructure are not covered in the calculations of the EEA because there is not enough comparable data, which is one of the factors the airline associations call attention to.

In their review of existing studies, the report notes that while there is a great deal of literature focusing on the embedded emissions of aviation, there is less literature on the embedded emissions associated with rail, in particular emissions from vehicle manufacturing and operational procedures and their impacts. This makes it difficult to make an accurate comparison between the total lifecycle emissions of air and rail, it concludes. To make a more comprehensive comparison, more research into these factors would be needed.

The impact of railway construction

The CO2 costs of building a railway indeed have to be taken into account in determining the environmental impact of a modal shift. Taking account of the CO2 savings from using high-speed rail instead of air travel, a study by the UIC calculated that the payback time in CO2 emissions from building new railways is between 10 and 15 years.

The International Energy Agency finds that optimal conditions for railway payback of carbon depend on the distance of the proposed railway, the affluence of the populations being connected and the availability of low-carbon electricity.

The figure below compares the emissions of rail construction relative to not constructing a high-speed rail line over a 60-year period. This is calculated under three scenarios, high, medium and low potential, as the avoided emissions depend on for example how many people actually take the train on the newly constructed railway line. The potential scenarios have differing difficulty of rail construction, train power mixes, alternative sources of demand and train occupancies, for example a higher difficulty of construction and a lower train occupancy rate in the low scenario. 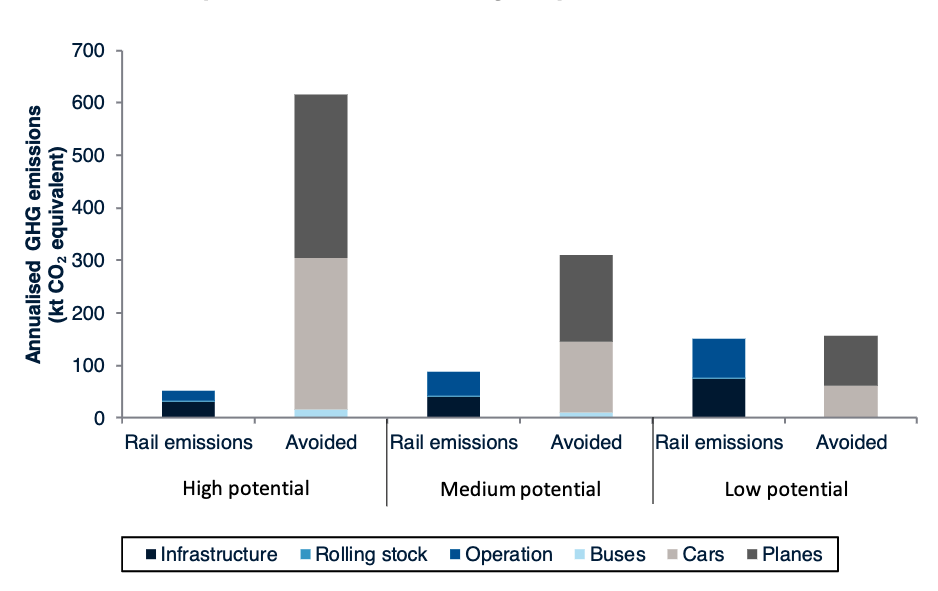 A modal shift from to rail is encouraged by the European Commission. Frans Timmermans, executive Vice President of the Commission, has called for a limit to short-haul journeys by air and a modal shift to rail as one of several measures to ensure that all travel under 500 kilometres in Europe becomes carbon neutral. Because even though Europe wants traffic to move to rail, this shift remains a vision, and not a reality up till now. A short flight ban would mean a serious measure in achieving this, but European member states are up to implementing this.

In France, a ban on all short-haul domestic flights of less than 2.5 hours where there are rail alternatives was passed in 2021 (excluding connecting flights). Italy is considering introducing a similar ban. Bans on short-haul flights are also on the table in Germany and Spain, and were introduced in Austria in 2020 for domestic flights with train alternatives under three hours.

A study by Transport and Environment, finds there is a potential saving of around 6 to 11 percent of aviation emissions within Europe on flights between 200 and 1000 kilometres, or 4 to 7 mega tonnes of CO2. It is assumed that all flights shorter than 300 kilometres will shift to rail (except to and from islands) as well as several improvements of rail. If more night trains would be introduced and trains would be 10 percent faster, the calculated emissions could be avoided by a shift from air to rail. The current modal split between air and rail is taken from the best practices of rail between European cities. A combination of discouraging aviation and improving rail services is needed to realise this CO2 reduction, says this study. An actual ban of short flights would mean that there is no more (passenger) aviation between certain cities, which was not take into account.

Based on this study, the report commissioned by the airline associations calculated that if flights of up to 500 kilometres are banned, this would lead to savings of 3 to 5 percent of intra-EU aviation emissions. The reduction of total transport emissions would be a higher percentage however, as aviation has the highest average emissions of all transport modes. It is also not to say that journeys of more than 500 kilometres could not be moved to rail.

Because 1000 kilometres is a high threshold for the journey length at which rail and air are likely to be substitutable, the report commissioned by the airline associations calculated only the effects of a ban of flights up to 500 kilometres. Although a ban on longer flights than 500 kilometres seems steep, some of these could still be still be shifted to rail.

To illustrate, taking into account rail journeys of under 500 kilometres in Europe would include Amsterdam-Paris (roughly 430 km), but not Amsterdam – Zurich (roughly 600 km) where a direct Nightjet train runs or Amsterdam-Prague (715 km), where a night train service from new operator European Sleeper will soon run. Especially with night trains, distances of more than 500 kilometres can be easily covered by train as a substitute for air travel. 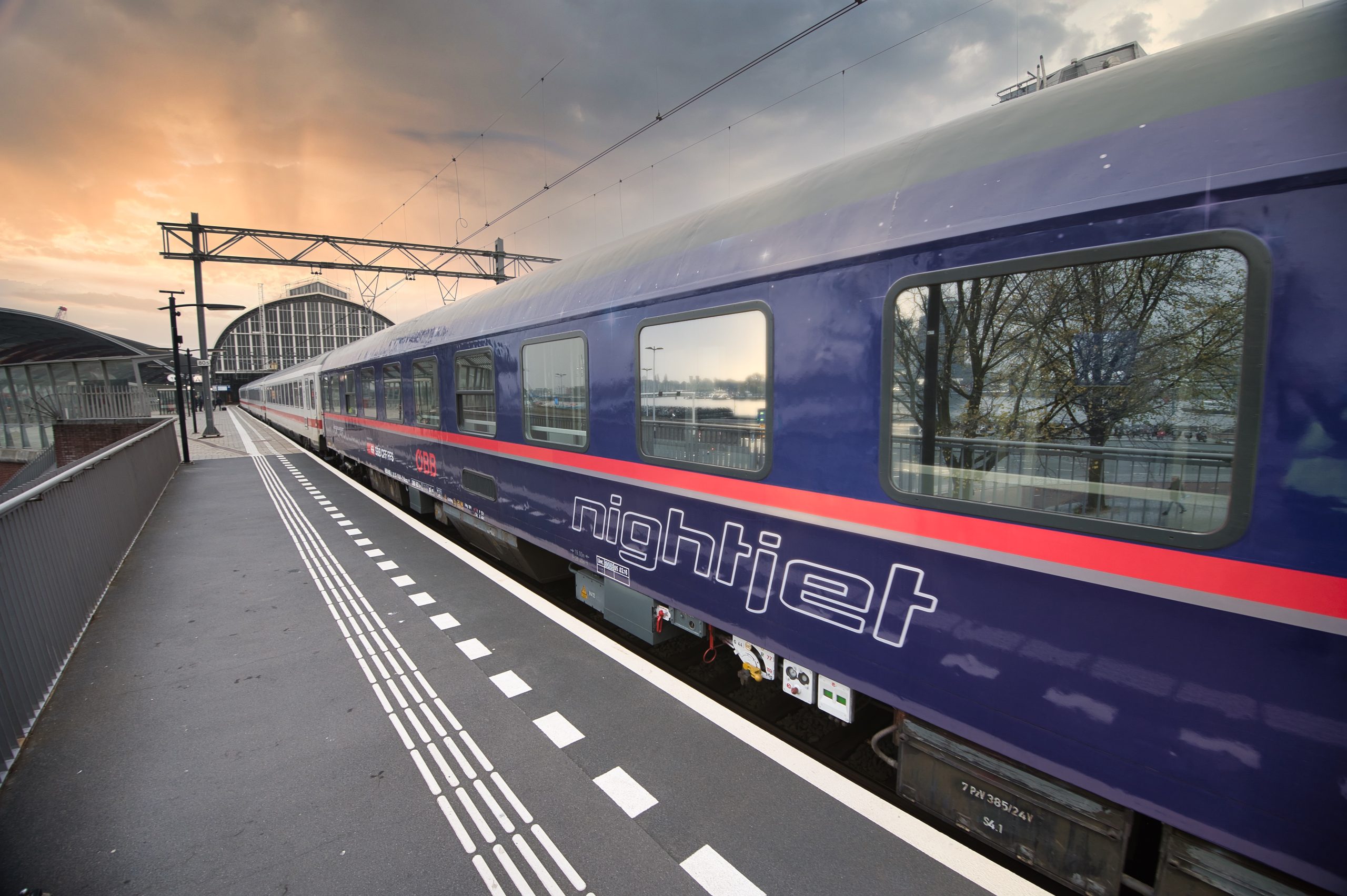 While there are certain elements that could get more attention, such as the total picture of rail emissions including vehicle manufacturing and railway construction, the differences in emissions between air and rail travel are undeniable. Yes, aviation can also reduce its emissions with upcoming technologies such as hydrogen and electric planes and more sustainable aviation fuel. Commercial use of electric or hybrid-electric passenger aircraft is expected in some regions by 2030, but fact is that most international trains have been fully electric for decades. With current aviation emissions, a shift to rail is the logical way forward, and any flight passengers that take the train instead are a win for the environment.