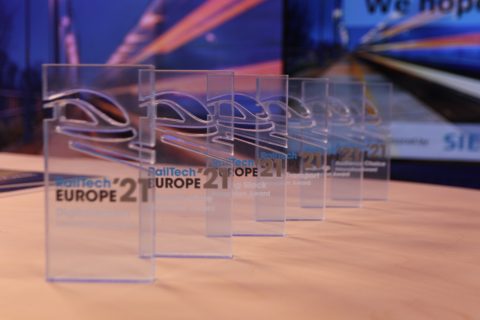 Last year’s Innovation Award winners: where are they now?

The submissions for the RailTech Innovation Awards 2022 are open again. But how is it going with last year’s winners? RailTech revisited three of them to ask what developments there are with their railway innovations.

During each RailTech Europe conference, innovations are celebrated and put in the spotlight, especially by awarding the Innovation Awards. This was no different during last year’s digital edition of the three-day event.

In the category Infrastructure, Belgian railway manager Infrabel won the Innovation Award with the renewal of 4 switches and 1 kilometres of track in 48 hours, a world premiere. With the ‘rail network block’, a section of track was pre-built on a concrete slab, right next to the tracks in use. This mega ‘Tetris piece’ was pushed into its final location in the course of only one weekend.

The method will be used again for the second time this March for an infrastructure project in Signeulx in the province Luxemburg, says Infrabel spokesperson Thomas Baeken.

When it comes to the category Rolling Stock, 3M Poland won with retroreflective marking of carriages. 3M provided a technical solution for PKP Cargo Service to make their trains safer, by providing durable, self adhesive, retroreflective films that can be easily applied. The marking in form of wide vertical striping, combined with train movement, increases visibility, especially at night to warn drivers from a far distance about danger.

“The awarded project is ongoing with new applications in Poland, but not to an extent like it can be if some regulations would be in place – it’s still a voluntary action of the PKP Cargo Service”, says Wojciech Ślaski, Application Engineering Specialist at 3M Poland. Next to Poland, the company received a couple of enquiries from other countries willing to learn more about 3M solutions that can be used for retroreflective marking of trains.

A new way of railway lighting

The Audience Choice award was won by Triolight, with RailLight. This is a railway lighting product which is attached to the outside of the rails. At railway yards, where train drivers have to walk back after parking a train, it reduces light pollution as it can replace the usual light poles and lights from spanwires above the rail. The grazing light on the ground creates a shadow so that obstacles are clearly visible. “The Innovation Award certainly gave our recognition in Europe a boost”, says Jorden Boer, Director of Triolight.

In the past year, a successful test with RailLight was carried out with SBB and Rhomberg in Switzerland, and delivery of the first RailLight luminaires for a project of SNCF in Paris is starting these weeks. The company also received various requests from the UK, Norway, Germany, Belgium, Croatia, Dubai and Kenya.

Submissions for the 2022 RailTech Innovation Awards are still open until 25 April. Entering a railway innovation can be done via this link.