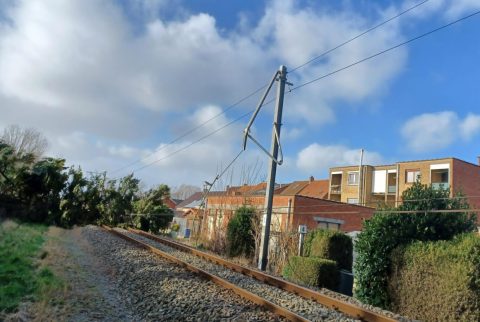 Rail traffic halted in the Netherlands, services scaled down in Germany, Belgium

Railway traffic in the Netherlands was halted on Friday afternoon due to storm Eunice. In Germany, Deutsche Bahn earlier in the day announced it would be suspending all services in the north of the country and in parts of the federal state of North Rhine-Westphalia. A similar decision was taken in Belgium.

Belgian infrastructure manager InfraBel and railway company NMBS/SNCB have scaled down rail services in the eastern parts Flanders by as much as 90 percent, while in the western part of Flanders railway traffic was halted completely.

InfraBel and NMBS/SNCB hope to resume regular service after 18.00. Their counterparts in the Netherlands, ProRail and NS, respectively, are tentatively aiming for 22.00.

In Germany, rail services were gradually discontinued earlier on Friday in Schleswig-Holstein, Lower Saxony, Hamburg, Bremen, Brandenburg and Mecklenburg-Western Pomerania. Deutsche Bahn subsequently announced the suspension of all railway traffic in the north of the country and in the northern parts of North Rhine-Westphalia. This applies to long-distance trains, regional services and freight trains.

In the United Kingdom, train speed restrictions are in effect all day, with rail services cancelled across Wales. Elsewhere, NetworkRail has suspended all services across Kent and many parts of Surrey and Hampshire. Sussex and South London are also affected, the company said.

Scotland, which bore the brunt of storm Dudley earlier this week, saw train services return to normal on Friday, with only some cancellation still occurring.

RailFreight’s UK correspondent Simon Walton was on the ground earlier on Friday for the following report: