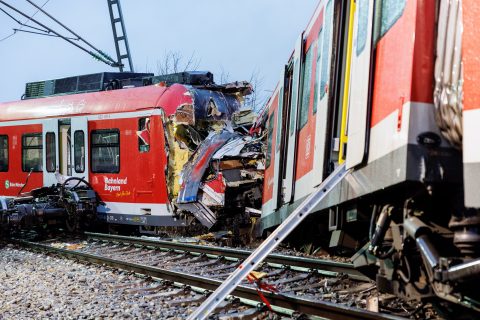 A collision between two regional trains near the southern German city of Munich killed one person and injured dozens of others on Monday.

The accident happened around 4.35pm at the Ebenhausen-Schäftlarn station, where two so-called S-trains collided. S-trains are regional trains similar to sprinters. According to Merkur.de, eighteen people were injured, five of them seriously.

There were 95 people in total in the trains. Some passengers managed to free themselves from the carriages, others were helped by rescue workers. The tracks where the accident happened are elevated on a railway embankment, which made rescue work and salvaging the trains difficult. In total, about 680 members of the police, fire brigade, rescue services and technical assistance were involved.

Eyewitnesses of the train crash

The Munich public prosecutor’s office is leading the investigation into the circumstances of the accident. Eye witnesses are also being interviewed. Some eyewitnesses reported strange driving behaviour of the regional S-Bahn train coming from Munich towards Wolfratshausen. It is said to have stopped several times.

Six months ago there was almost a head-on collision between two S-trains in the area. They were travelling towards each other on the same track. The drivers were able to brake just in time. The trains came to a halt 150 metres from each other.