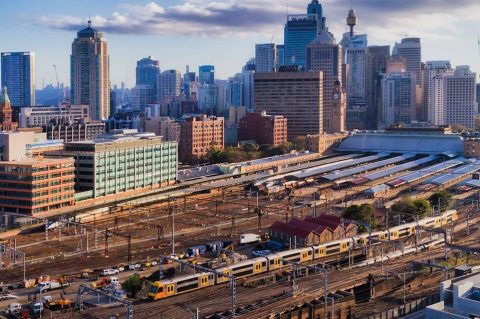 Rail industry sources have reacted positively to the abolition of export tariffs between the UK and Australia. The word from Westminster is that there is opportunity for a potential export boom for operators, suppliers and consultants.

The UK government has signed a deal with their Australian counterparts, to remove  a five per cent export  tariff on rail products,  potentially cutting costs and making British bids more competitive. It is being heralded as a major free trade Brexit benefit.

According to government sources, the deal will allow rail companies to build on some of the British successes already enjoyed in the Australian rail sector. These include manufacturer Altro, who supply floor coverings, used in the refurbishment of the Melbourne tram system and on trains in Victoria and Queensland. More significantly for the rail freight sector, consultancy firm Ricardo, headquartered at the Shoreham Technical Centre in the UK, already earns a quarter of all its rail revenue in Australia having won several high-profile projects.

Ricardo has been active in Australia for some time, and acquired a technical services company there two years ago. Stephen Boyd, their Managing Director of Transport Engineering for the Australia and New Zealand markets, said at the time he was looking forward to growing the business. “By leveraging Ricardo’s scale and resources, we will be able to expand rapidly across Australia and New Zealand and broaden the range of technical services we already offer”, he said.

Australia is already the highest priority country for UK rail exporters, say the UK government. “More than 82 billion pounds (155 billion Australian dollars / 93 billion euros) [is] being invested by Australia into its networks over the next decade, including new cross-country lines and modernised metros in cities including Melbourne”, say government sources. That includes the significant investment in the “Inland Rail” project, a new freight spine connecting critical ports in Brisbane in the north and Adelaide in the south, examined recently on RailFreight.com.

“All current tariffs on rail-related goods, including railway stock, track fixtures and fittings, and traffic signalling equipment are set to be scrapped as part of the free trade agreement (FTA), which will allow UK companies to be even more competitive when bidding for Australian government contracts worth billions of pounds in the coming years”, says London. “British rail companies will also benefit from new, legally guaranteed access to bid for Australian government contracts on an even footing with their Australian competitors, opening up billions of dollars of public sector rail contracts.”

Speaking in general about the sector, UK International Trade Secretary Liz Truss said rail exports were a success story for the country. “Australia is undergoing a huge reconstruction of its train networks and this trade deal will allow British companies to be even more competitive when bidding for these massive, multi-billion-pound infrastructure projects”, she said. “These major contracts will support high value jobs up and down the UK, and allow more of our professionals to live, work and enjoy life on the other side of the world.”

Part of the deal will allow British experts to work more freely in Australia. “Many UK rail suppliers already trade with Australia – from manufacturing firms in Doncaster to design companies in London – and with a Free Trade Agreement they can deliver even more”, said the Chairman of the Railway Industry Association, David Tonkin, who backed up the government enthusiasm. “With Australia voted as the number one priority market for rail businesses in the UK, a trade deal will be welcome news to many, allowing them to more easily sell our world-leading products and services into the market.”

Advantages may be offset

The UK rail industry is a major exporter, selling 800 million pounds (910 million euros) each year across the world, noted Tonkin. “It has a pivotal role to play in achieving the Government’s vision of a ‘Global Britain’, supporting a clean, environmentally-friendly form of transport both at home and abroad. This comes as the Department for International Trade and Innovate UK launch a competition that will support UK companies in the rail sector to innovate globally. The competition will award small businesses grants of up to 50,000 pounds to help them access growing markets such in Australia, India, and Canada.

Given the scale of projects in Australia, such as Inland Rail, the opportunities for British engineers to apply expertise in a larger context is to be welcomed. Critics have said that any advantages may be offset by more difficult trading conditions nearer to home, and that European contracts may be harder to come by. However, swapping Brussels for Brisbane and Strasbourg for Sydney may yet be a g’day for the UK rail industry.

Grand Glorious Great ‘GLOBAL’ Britain chest pounding and boasting about a TRAIN anything with Australia! How Massive can Global Britain achieve! Wow
Australia, the only English Speaking country with a worse Railway network than the UK… other than the USA.
USA does not count as NIL is not quantifiable in such terms. LOL
Yeah, how fantastic… hahaha ROFLMAO